Ashburnham Municipal Light Plant is always working in our customers' best interests. We participate in and support our community—sometimes behind the scenes, and sometimes in very visible ways. Here are some of our latest announcements, projects, and initiatives.

THE AMLP RECOGNIZED WITH THE COMMONWEALTH'S “LEADING BY EXAMPLE” AWARD 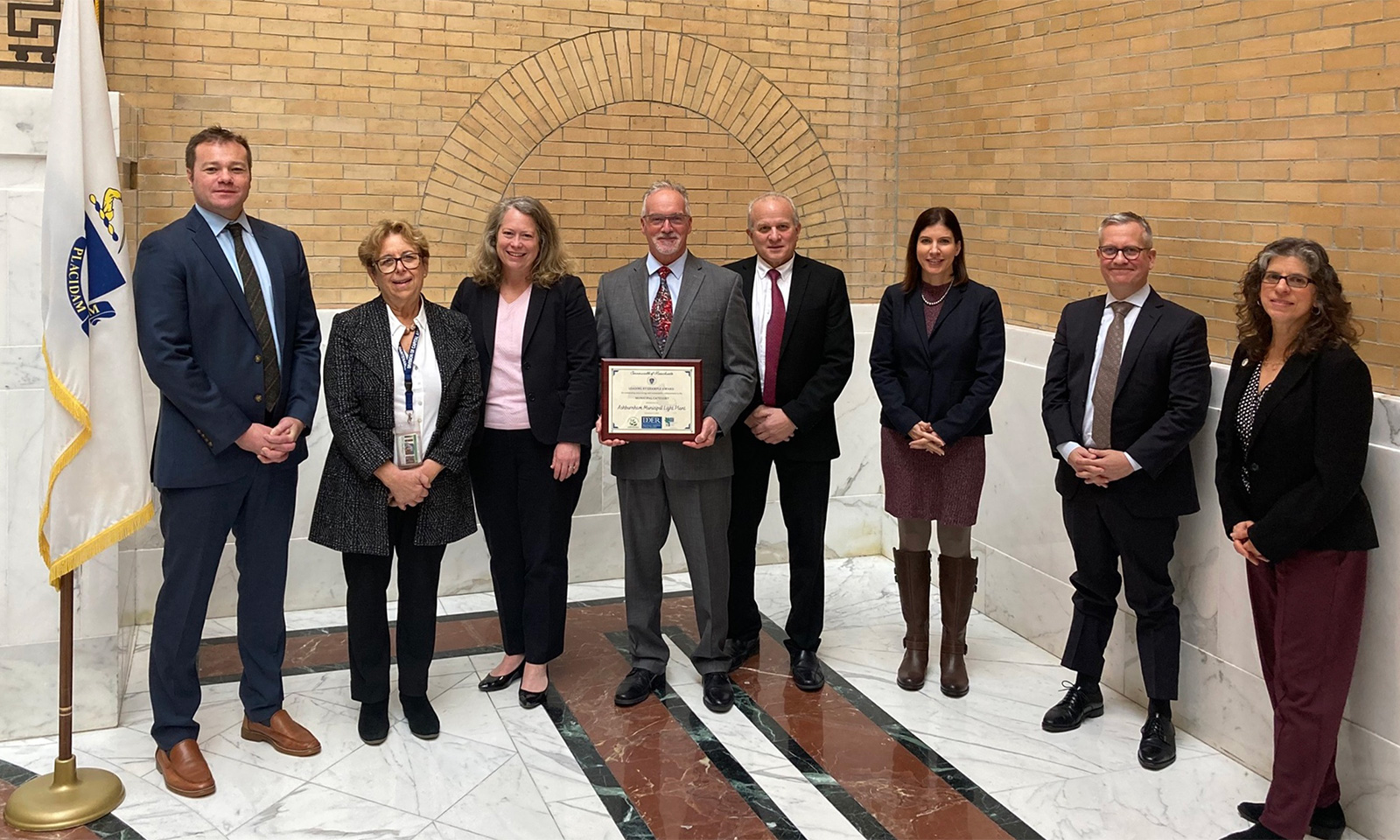 (Dec. 13, 2022) On Tuesday, December 6th, the Ashburnham Municipal Light Plant’s General Manager, Kevin Sullivan, accepted the MA Department of Energy Resources (DOER) “Leading by Example” Award in a ceremony at the State House on behalf of the AMLP. This award recognizes the light plant for its decarbonization and clean energy efforts — specifically, for a series of actions taken over recent years, including:

The AMLP also participates in the Berkshire Wind project. Read the complete PDF of this story.

(Sept. 9, 2022) The long-awaited EV charger installation located behind Town Hall is now operational. There are a total of 4 ports which includes one handicap designated port. As with all public chargers, please follow the on-screen tutorial to use the charger.

(Updated 12/31/21) Ashburnham residents and visitors will soon have more spots to charge their Electric Vehicles. The AMLP was recently awarded a $28,158 grant from the Massachusetts Department of Environmental Protection’s Electric Vehicle Incentive Program-Public Access Charging Program to install a new public electric vehicle charging station with four ports at Main Street and River Street. This will bring the total number of charging ports in town to 6, including the 2 at the Stevens Memorial Library.

General Manager, Kevin Sullivan, said that the AMLP applied for the grant with the help of their partner, the Massachusetts Municipal Wholesale Electric Company (MMWEC), because electric vehicles are increasingly popular and help reduce carbon emissions.

The new EV Chargers are projected to be installed in Spring 2022. 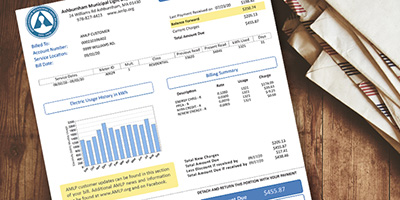 (Updated 9/14/2020) Your AMLP bill now has a new look and layout with easy-to-read Billing Details and a Usage Graph, so you can review your usage and charges more effectively. Get a more detailed explanation of your new AMLP bill and charges by visiting our Explaining Your Bill Page.

(Updated 9/09/2020) During the pandemic, the AMLP Lobby remains closed to customers and visitors. We do have a sliding window adjacent to the front door where we will continue accepting cash payments. Please wear a mask for your protection and ours.

Feel free to use the Driveway Drop Box for Checks or Money Orders. The contents are collected the morning of every workday. For electronic payment visit our How to Pay Your Bill page.

Thank you for your participation. We will only get through this difficult and challenging period by working together. Read Updated Pandemic PDF Announcement here.

(Updated 6/08/2020) During Phase 2 of the pandemic, the AMLP Lobby remains closed to customers and visitors. We do have a sliding window adjacent to the front door where we will continue accepting cash payments. Please wear a mask for your protection and ours.

Feel free to use the Driveway Drop Box for Checks or Money Orders. The contents are collected the morning of every workday.

Thank you for your participation. We will only get through this difficult and challenging period by working together. Read the Phase 2 PDF Announcement here.

(Updated 6/08/2020) FEES WAIVED: To help alleviate any difficulties resulting from the AMLP office being closed to the public, we have temporarily waived the $0.40/transaction convenience fee for ACH/EFT payments and the $0.95 IVR surcharge. Read the complete announcement here. Please call us with any questions at (978) 827-4423.

(Updated 3/16/20) OFFICE CLOSED TO THE PUBLIC: The safety and health of our customers and employees is our top priority. Due to the ongoing health situation, the AMLP office is closed to the public. For complete information, please read the complete announcement here.

(Updated 3/25/20) FEES WAIVED: To help alleviate any difficulties resulting from the AMLP office being closed to the public, we have temporarily waived the $0.40/transaction convenience fee for ACH/EFT payments and the $0.95 IVR surcharge. Read the complete announcement here. Please call us with any questions at (978) 827-4423. 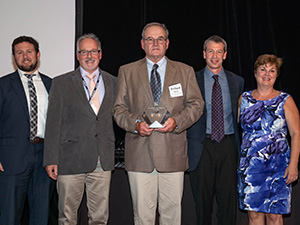 The Northeast Public Power Association has recognized Commissioner Rick Ahlin for his dedication to the AMLP and its customers. Rick has been a watchdog for the Ashburnham Municipal Light Plant for over twenty years. An advocate for the Public Power electric utility business model, Rick has taken the utility from pre-deregulation to a time when the utility is deeply involved in the throes of technology and renewables. Rick had voted for and witnessed the installation of our 3MW/5MWh lithium ion battery storage system which came on line in 2019.

A professional in the natural gas business, Rick has been a Commissioner through the generation of electricity from coal and oil to nuclear, natural gas, solar and wind generation. At no time in the history of electric utilities has there been more change in the industry. The AMLP thanks you for your service. If it were not for your judgment and understanding of the electric utility business, the AMLP would not have served its customers as well during your tenure.

Come see it yourself during the 2019 National Drive Electric Week. View or download our event poster. 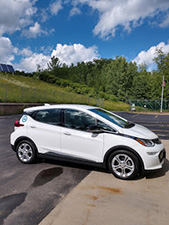 When the Ashburnham Municipal Light Plant’s (AMLP) pickup truck had to be retired this year, General Manager Kevin Sullivan wanted to make an environmentally conscious decision when choosing a replacement vehicle. With the purchase of a Chevrolet Bolt, AMLP became the first municipal agency or department in town to purchase a fully electric vehicle.

“The AMLP needed a vehicle that shouted technology, supported the fact that the AMLP was energy conscious, and indicated that to our customers,” Sullivan said.

Sullivan was interested in purchasing a 2019 Chevrolet Bolt, but he also wanted to make sure the electric vehicle was a financially feasible decision for his department. He partnered with MMWEC’s Emerging Technologies Team to leverage potential discounts. Thanks to a $1,000 rebate from General Motors, a $6,500 rebate from Quirk Chevrolet, and a $7,500 grant from the state Department of Environmental Protection, he was able to save $15,000 off the sticker price. “MMWEC made the process seamless,” Sullivan said.

The vehicle made its debut at the town’s annual Ashburnham Community Day and is now used by AMLP staff to drive around town. The Bolt takes approximately eight hours to charge from empty to full, and can travel 238 miles per charge. The car replaced a Chevrolet Silverado 1500 truck and is estimated to offset more than 170 gallons of gasoline annually with its 50 mile per week usage. It boasts 128 city and 110 highway miles per gallon equivalent (MPGe), making it at least five times more efficient than the truck. It will be able to charge from AMLP’s distribution system, which receives more than 50% of its power from non-carbon emitting generation resources.

Whenever he has the opportunity, Sullivan invites other municipal employees to ride in the department’s Bolt with him so they can learn more about the benefits of electric vehicles. He said he hopes AMLP inspires other town agencies and residents to reduce their carbon footprints.

“My hope is that the AMLP is viewed as a leader, spawning additional municipal and customer interest in electric vehicles,” Sullivan said. The AMLP has lifted the Solar Moratorium in place since 2015. Due to successful operation of the Battery Storage, a limited number of residential solar installations can take place in 2019. Eligible customers will be contacted the first half of August.

On Wednesday, May 29th, the Ashburnham Municipal Light Plant hosted a ribbon cutting ceremony with state and local officials, for our new 3-megawatt/5-megawatt-hour Battery Storage Project off Williams Road.

This new system from NEC Energy Solutions, stores energy inside the battery container that can be released during Peak Load Periods of heavy electrical usage, reducing peak transmission and capacity payments through cost avoidance.

The $3.5 million Battery Storage Project came online in January. 25% of the project was funded by a grant from the Mass Clean Energy Center. The remainder of the project was financed through a Massachusetts Municipal Wholesale Electric Company (MMWEC) pooled loan program.

See the stories and photos from local newspapers here: Tuesday, April 23rd, the AMLP was awarded a $7,500 grant from the MADEP to advance the electric vehicle charging infrastructure in Ashburnham. General Manager Kevin Sullivan (4th from the left) is shown here accepting the award. 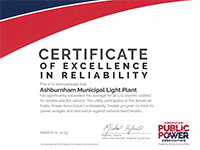 The AMLP’s Battery Storage Project went online January 1st, and since that time has released energy January, February and March, successfully reducing our monthly transmission peak. Congratulations to the AMLP staff on the completion of a project that will provide years of peak demand reduction, helping to control transmission and capacity costs.

This project was made partially made possible with the assistance of an ACES Grant. Read more here → 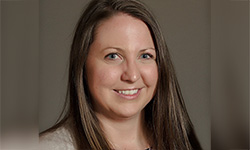 The Municipal Electric Association of Massachusetts (MEAM) recently recognized Brooke Csaznowski, the AMLP's Office Manager, with a "2018 Communicator of The Year Award". The decision was made by MEAM's Communications and Energy Services (CES) committee. Congratulations, Brooke!

Ashburnham Municipal Light Plant is one of 26 communities to receive a state grant for a $2.5 million battery storage project. The $600,000 grant will cover 24 percent of the cost of a 2-megawatt battery storage system that will reduce Ashburnham’s dependency on power from the grid and more. We're proud of our entire team. On December 16, the Sunday Telegram featured our own Jeff Schrecke, one of our linemen who had just returned from St. Thomas in the US Virgin Islands, helping out with the restoration of their power grid. 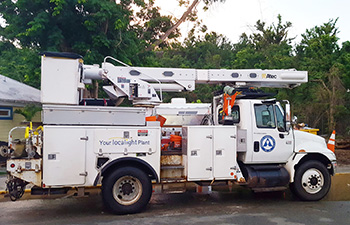 After experiencing the destruction of Hurrican Maria during relief efforts, AMLP donated one of its bucket trucks to the U.S. Virgin Islands Water & Power Authority to assist in the hurricane relief and power restoration efforts on the devastated islands.

Click here to read more in The Gardner News → 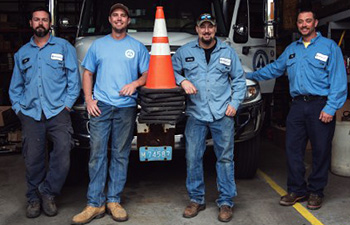 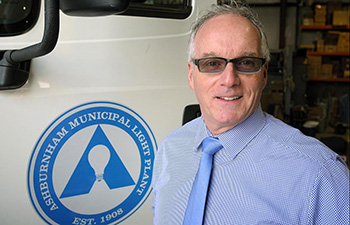 It takes just right the person with the right qualifications and capabilities to run a municipal light plant like AMLP. Kevin M. Sullivan is just the right fit.

Click here to read the Sentinel & Enterprise article →
Back to top